THE MAKING OF A TERRORIST

November 02, 2008
I am watching and enjoying Santosh Sivan cinematography right from my age of 7 - initially few, unknowingly and rest of them as his intended fan. It started from Thalapathy & Roja and traveled a very long way through Indira, Siraichaalai, Uyirae & Iruvar, Asoka, Terrorist & Navarasa. But I don't have much of impression on him as a film director. Tahaan changed it. 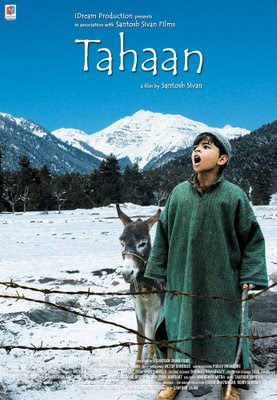 "Tahaan, a boy with a grenade" is the story of an eight-year-old boy and his donkey (but definitely, it cannot be simply stated as a kid-pet flick). Its the back-drop, Kashmir which plays the major role in the screenplay. Cross-border Terrorism is the basic fiber which knits it and its really surprising to see such a movie has no Muslim villains, no bomb blasts and no blood shed in it (FYI - Mr.Vijaykanth).

Tahaan (Purav Bhandare) is a Kasmiri boy living with his mother (Sarika), elder sister (Sana Shaikh), grand father (Victor Banerjee) and a beloved donkey (named as Birbal). They are waiting for his father to return who is missing for 3 years due to the Kashmir crisis. The family is under a heavy financial strain owing to a huge loan that they sells off almost everything including Birbal to Subhan Darr (Anupam Kher).

Subhan who bought the donkey as a gift to a child along with few others, including Zafar (Rahul Bose), who is behind a girl, is on the way back to home and Tahaan, after a couple of attempts, joins their troupe to get Birbal back. A teenager (Ankush Dubey) promises to help him if he carries a package to the other side of the mountains. The teenager is a terrorist and the package has the bomb.

Rest of the film can be watched at theaters. The movie moves in a slow pace and I blinked at my wife often in between where our back seat girls laughed for few of the hindi dialogues. The notable performances are from Sarika (her eyes did it especially when she is querying the police behind a barbed fence about her husband) and Purav (his face did the same throughout the movie).

Also, unusually, the screenplay is well made, unlike Santosh Sivan's previous movies. Particularly, the donkey race sequence is utterly touching and has the glimpses of faded humanity in it. The flavor is enhanced by the song free plot and persistently silent back ground score. Nature speaks more than dialogues which are powerful enough to generate the mood among the audience.

Capturing the beautiful Kashmir in a movie is not a big deal. But still, the Sivan magic works here. The peaceful snow fall of December is the royally executed in the long shot. Its the angles which differentiate the cinematography of this movie from the past Kashmir based movies (one peculiar angle is behind the donkey's wide ears). He did that intellectually such that its within the play.

I am a bit uninterested in the way the climax goes (same as the case of Terrorist). My suggestion would be the bomb should have blasted somewhere for which Tahaan should be arrested and in the last scene Sarika should wait for police behind the bared fence with his husband's photo in one hand along with her son's photo on the other hand. But unfortunately I was not in his story discussion unit.

What is the news it is telling? Kashmir is powerfully yet silently cooking terrorists at their very young ages - means victimising innocents simply by exploiting their weaknesses like religion, money etc (ironically the weakness factor is the bond with a pet in this case). The direct impact is severe death toll. The indirect impact is even more worse - families waiting infinitely for the missing members.

"People joked -- any time it will snow now, just like peace" Sivan told in an interview. Tahaan is a peaceful snow. I rated Black (Ravi.K.Chandran) as the ever best cinematography in any Indian movie till date - now, I am equalising Tahaan with it. I wrote his name in front of the field "Cinematographer" in the cast & crew list of the cinema which I dreamed during my college days. Tahaan ensures it.