November 25, 2008
Foreword 1:
"It's a simple recipe: you boil up the sweat and urine with distilled water and filter it to remove hair, lint and other contaminants." - A US News Reporter

Foreword 2:
Remember, Kevin Costner drinking his own Pee in the Hollywood movie "WATERWORLD" (directed by Kevin Reynolds and released in 1995).

Foreword 3:
This post is dedicated to Tamil film actor and director Kamal Haasan who never missed to include a urinating visual sequence in his movies.

Along with food warmers, modular booths, fitness equipments and a tiny fridge, another peculier but innovative instrument is also launched with the Space Shuttle Endeavour's 27th flight to the International Space Station on November 14, Friday. It is the "Water Recovery System" (WRS) that turns urine into drinking water.

The unit costing US $250 million is basically a sewage treatment plant that will be hooked up to the new US $19 million toilet. The toilet is equipped with funnels that will channel the liquids to the WRS. All the reclaimed water will go through a processing system to extract free gas and solid materials such as hair and lint.

Apart from this, the fluid from showers, shaving, tooth brushing and hand washing, as well as perspiration and water vapor that collects inside the astronauts' space suits are also purified into water. The system can capture cabin condensation too. The water recycling unit is successfully installed in the space station last Tuesday. 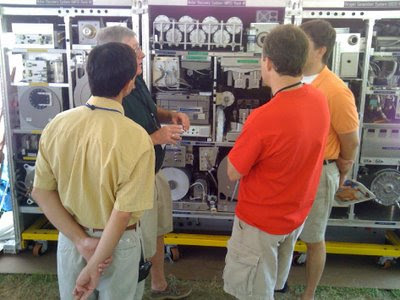 Water in space travel means weight in addition which dumps the valuable space on a spacecraft. "As early as the late 1960s we knew sustaining life in space would require recycling water and oxygen" says Bob Bagdigian, the project manager for the overall Regenerative Environmental Control and Life Support System on the station.

When it's fully functioning, the system will be able to pump out 93 kilograms of pure water everyday for the station's seven crew members. The recycling machine should cut down the amount of water and consumables that must be launched to the station by about $600,000 or 6,800 kilograms, a year.

"Some people may think it’s downright disgusting, but if it’s done correctly, you process water that’s purer than what you drink here on Earth. It allows us the capability of being more self sufficient and not requiring as many supplies to be sent up to the space station" says astronaut Heidemarie Stefanyshyn-Piper.

Indeed, if successful, the WRS system will be crucial to some of the long-term missions (like moon or mars) NASA is planning for the future (In its shuttle program in 2010, the electrical systems create water as a bi-product and after recycling it will answer much of the station's drinking water requirement).

Tail-piece 1:
Waiting for the new device are five containers of waste water from the Russian toilet aboard the space station to get recycled.

Tail-piece 2:
The astronauts won’t be drinking the water produced from the unit immediately. A sample will be taken back down to earth for testing.

Tail-piece 3:
Sources say that NASA is going to commercialise the Water Recovery System and make it
available for common man to enjoy (?!).