September 07, 2008
Animation movies, usually - intended at children - have a lot of fun packed with a centre thought - just like an ice cream cherry. But WALL-E, a 97 minute animation movie from Walt Disney Pictures (in association with Pixar Animation Studios) is different. It alarms and frightens the current world to have a right concern on our everyday dusty habits.

The story starts by the year 2805. WALL-E (abbreviation of Waste Allocation Load Lifter - Earth), our hero, is a hard-working mobile trash compactor robot and the last unit in operation among those created in 22nd century by the Buy n Large Corporation (the corporate responsible for all the economic activities on Earth, including the government). 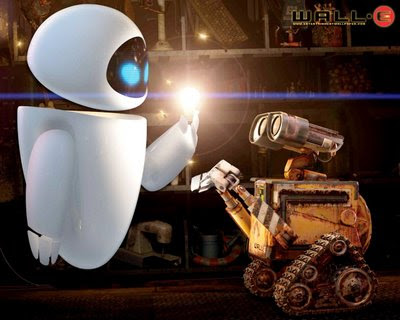 The screenplay slowly reveals the story how such a scenario is reached and where the human beings are residing now. The generations of 2805 are living in AXIOM (a space station floating beyond galaxies with fully-automated robot crew) that supports every need of humans who are too obese to even stand without robotic assistance.

EVE (Extraterrestrial Vegetation Evaluator), a sleek, advanced robot (depicted as feminine) which looks like any Apple product of today was sent from AXIOM to identify plant life in order to determine whether the Earth is capable of supporting human life. The hurdles which EVE and WALL-E faces on bringing the plant to AXIOM forms the plot.

Its WALL-E who fell in love with this EVE. Yes - the prolonged centuries of experience and knowledge teaches emotion to this robot. Andrew Stanton, the director of the movie says "WALL-E is the only one still truly living. And what is the ultimate purpose of living? To love. And WALL-E falls head over heels with a robot named EVE."

Even there is an uncensored kiss scene involving this robotic pair - EVE gives WALL-E a face to face "kiss" (an electrostatic discharge). The WALL-E is projected to be inspired by the musical video of Hello, Dolly! (1969). Another interesting characters in the film is M-O (Microbe Obliterator) which is following WALL-E to clean the "foreign contaminant" and a cockroach which managed to survive in earth in spite of the pollution.

The film runs silent for most of its time which again is a new one to the animation trend. WALL-E and EVE finally hold hands together and the human generation returned to earth and rehabilitate the globe. But What I understood from the movie is if the environment is not cared properly, the future earth will possess only robots making love.