September 08, 2008
Google Chrome is a free and open source web browser developed by Google Inc. and launched just a few days ahead of the company's tenth birthday (Yesterday Google celebrated it). On a prosaic level, Google Chrome is a classically minimalist Google product – a fast, stripped-down alternative to Mozilla Firefox, Apple Safari and Microsoft Internet Explorer. 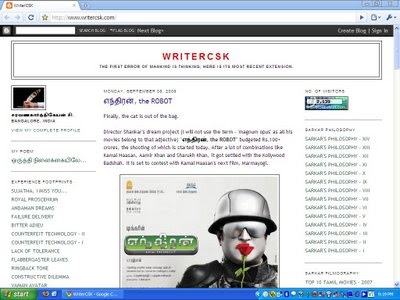 Its beta version for Microsoft Windows was released in 43 languages on 2 September 2008, one day ahead of the scheduled release due to a "comic" tale. A German blogger who received the 38-page Google Chrome Comic (words by the Google Chrome team, comics adaptation by Scott McCloud which explains its features) shipped by Google, made its scanned copy available on his website, one day earlier to the release date.
As an SQA Engineer, the following features attracted me at first instance:
An act of just downloading the Google Chrome Beta and give a test run (you can continue using it if you really like it) can be the best birthday gift to the decade-old Google boy. After all, its free. In fact, this particular blog post is published to www using Google Chrome beta. My gifting ceremony is over. What about you?