September 29, 2008
Film review in blogs became a disease now and I am the recent infection. OK. Coming to the point. Its interesting coincidence that I encounter to watch a couple of Tamil entertainer movies ச-ரோ-ஜா (SA-RO-JA) and பொய் சொல்ல போறோம் (POI SOLLA PORAM) in a row. They have a lot of things indulged in commonality (other than I watched them in a row).

Both got released at nearly the same time (consecutive week ends). Both belongs to comedy genre (former is a thriller and later is a drama). Both are chronologically, the second movie to the directors (one is Venkat Prabhu's after "Chennai-600028 and the other is Vijay's after "Kireedom"). Both the movies doesn't have any notably big star cast.

And finally, both are remakes of some foreign bodies (SA-RO-JA is an unofficial snatch from Stephen Hopkins' English movie Judgment Night [1993] and POI SOLLA PORAM is the official one based on Dibakar Banerjee's Hindi movie Khosla Ka Ghosla [2006]). All these things, ultimately but unfortunately, made me to compare the two movies. 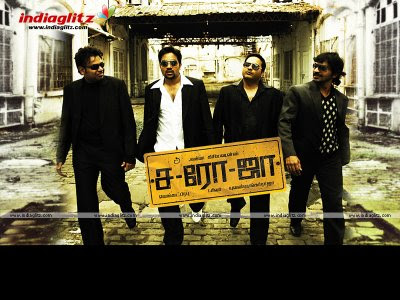 Let us talk about SA-RO-JA first. Its clear that the film is NOT much entertaining as that of Venkat Prabhu's previous "Chennai-600028'. Most of the film is captured in darkness (as the story is happening in a single day, mostly in night) such that its relatively darker, even when compared Maniratnam movies. Its really an overdose to the eyes.

Its about a girl (she is SA-RO-JA) who is kidnapped by a gang while 4 friends accidentally entered the criminal's locality and the rest forms the comedy of errors. The dialogues are (as usual) good, enjoyable and of course, down to earth. The climax is stretched for nearly an hour, testing much of the viewer's patience (remember the climax of the movie "Jeyam").

A large junk of claps and whistles in theater while the title caerds read Yuvan Shankar Raja. But... What happened? Though not personally satisfied by the movie, I am seeing a heavy positive applause from the media and audience to the crew especially to, Venkat Prabhu. Venkat, What are you going to do, the next time?

POI SOLLA PORAM, on the other hand is a class movie. It entertains me a lot and made me sit in the tip of the ice on moving towards the climax. Neatly knitted screenplay and trimmed dialogues are captivating and improve the movement of the drama with a thriller's pace. And a handful of logical flaws too adds up the spice. 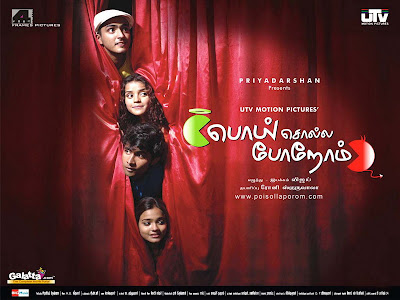 Karthik did an extraordinary job underplaying with his usual streak - he is my favourite right from "Alaipayuthey" period (he is using my mobile model MOTOSLVR L9 in the movie). The expressions of the female lead Piya and the voice of Suchitra are competitive to each other to achieve the next door girl's fragrance.

Over-all, the cast is very good (Nasser and Mouli's assistants and Rayapuram terror are best examples). This is one of the career best roles of Nasser. Nedumudi Venu fits the retired middle class dreamer, enhanced by the voice of Murali. Mouli, Bosskey and Delhi Gansesh - as usual. The guy who acted as Karthik's brother also did well.

Cinematographer Arvind Krishna is another hero in the movie but behind curtains. Though re-recording is a bit louder, the limited songs are much situational and sensible. Hats off to director Vijay, producers Priyadarshan and U TV for selection of such a story to do a remake and they wins in every aspect of the movie (right from the titles).

I heard few comments that the film looks like an amateur drama. They must be joking (or a part of POI in POI SOLLA POROM). To me, the film is a wholesome entertainer with reality. Yes. Reality about realty. If you have only 3 hours time having choice of watching either SA-RO-JA or POI SOLLA POROM, I would recommend you to watch the later.

Else if you have a lump some time, watch both.