September 01, 2008
தாம் தூம் (DHAAM DHOOM) is the last movie cinematographed, scripted and directed by Jeeva before his death. In fact, he died during the final schedule of its film shoot in Russia last year after suffering acute cardiac arrest at the age of 44. The movie starts with an ode "தொடர்கிறது உன் பயணம் வழி காட்டும் ஒளியாய்..." in remembrance of the great cinematographer. 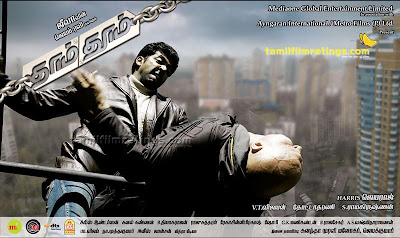 It seems that after his demise, its his wife Anees (who is also the costume designer of the film - its a long standing culture in Tamil industry that film director's wife being the costume designer for the movie starting from Kamal Haasan to the recent Vishnuvardhan) and his Guru PC Sreeram took efforts to complete the movie. The producer should be thanked.

Its quite natural that any creator will receive an instant overwhelming on his works immediately after his death and Jeeva is not an exception. Every audience (who comes to watch the film for Jeeva) wants to segregate the movie into JEEVAic and NON-JEEVAic partitions (My wife announced before every scene to which category it belongs to). I am completely out of this game.

Obviously one will give the credits of stupidities to NON-JEEVAic and the complementary to JEEVAic. I can totally understand that there are lot of possibly good chances that whatever expected to be made by Jeeva is NOT that case and vice-versa. Also exaggerating a personality after death is merely a sin, even more critical than degrading him after death.

The major plot of the movie revolves around 4 characters - Gautham Subramaniam (Jayam Ravi), a young but intelligent doctor from India, Anna (Maria Kojernikova), an advertisement model in Russia, Aarthi Chinnappa (Lakshmi Rai), a lawyer of Indian origin in Russia, Raghavan Nambiar (Jayaram), the Indian consulate official in Russia. Its said to be a suspense story.

All other characters - including the female lead role Shenba (Kangana Ranaut) are junk and just adding up the spice to the movie - unwanted tasteless masala. I am NOT sure who introduced the formula to Tamil Cinema : In spite of all the seriousness happening with the story there should be a duet for lead pair with 100 people dancing in background. Shit!

Jeyam Ravi is as usual (leaving it to your predictions). Jayaram did the negative role (I think for the first time). Lakshmi Rai, the actual female lead role did a better job. Srinath, the comedian introduced by Jeeva in the movie, Unnalae Unnalae is NOT bad. Nizhalhal Ravi, Anu Haasan (For how many years will she play this homely kindness packed "Akka" character?), Chetan, Mahadevan and Bose Venkat are there to count. That's it.

Kangana Ranaut is simply awesome. But, in general, Tamilians don't prefer lean girls (Trisha is an exception). Maria Kojernikova, the beautiful Russian doll comes around just 20 minutes in the film but forms the major plot (her childish shade of smiles with "Dhanyawaad" and "Sukhriya" before the cruel end is much memorable).

The script (co-written by Tamil literary fame S.Ramakrishnan along with Jeeva) is struggling like anything. Being the author of books உலக சினிமா (World Cinema) and அயல் சினிமா (Foreign Cinema) he would not have expected that his first script is attributed to such a movie. The knots and turning points implanted in his script are worse than those coming in Rajesh Kumar's crime novels.

He deceived in dialogues too - just as he did with Bheema and Sandakkozhi. The only film which he wrote some good dialogues is Unnalae Unaalae (Am over-ruling Rajinikanth's Baba). Nobody will believe that he is a great literary figure once they encounter his film dialogues. He is compromising a lot besides what he can really do.

It seems that Harris Jeyaraj brings out the monotonous kind of back ground score for foreign location suspense thrillers - It resembles Vettaiyaadu Vilayaadu. Also there is no proper explanation for few incidents happened in the screenplay (usually these knots are expected to be unveiled at last) which may not be necessarily araised from the editor's desk.

The only consoling part of the movie is the visually sophisticated scenes captured at Moscow and Coorg. Whoever responsible for that (either Jeeva or somebody else) can be congratulated without any second opinion. Its a big puzzle that in what way the title is related to the plot and how it gained the tax exception (for pure Tamil title) from TN government.

They are telling that its Jeeva's "last movie". No matter whether it refers to the order of either chronology or quality. The only problem is that I cannot tell a "Better luck next time" to him. Anyway, he left some fine pieces of examples on cinematography to us. Jeeva, in my view is a better director of photography rather than a good director of filmography. I salute him.