February 21, 2009
Why you always digging on my nerve?
I feel weak, when I say "please" you keep on
Does breaking me make you feel so strong?

Do you know who is this Mathangi Maya Arulpragasam?

OK. Everybody knows that A.R.Rahman is nominated for 3 Oscars in 81st annual Academy
Awards going to be announced tomorrow. 2 of these 3 nominations, he is sharing with a couple of other people. Yes. The Academy Award for Music (Song) category will be given to both the composer and lyricist. For "Jai Ho" song, A.R.R. is nominated along with Gulzar and for "O Saya" song, he is nominated with M.I.A. 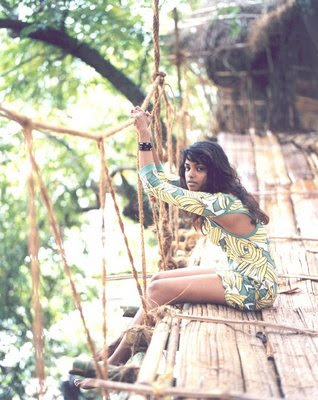 This M.I.A. (acronym for "Missing In Action") is the stage name of the girl whom I have asked about initially in this post - Mathangi Maya Arulpragasam (simply "Mathangi" hereafter). Mathangi is a Sri Lankan Tamil who is living currently in U.K. (in fact, a British citizen now). She is multifaceted - a singer, a lyricist, a painter, a fashion designer, a music producer, a photographer, a screen-writer and a film-maker.

Mathangi is the daughter of Kala and Arular (a) Arulpragasam, who was a founding member of the Eelam Revolutionary Organisation of Students (EROS), one of the political groups that worked to establish an independent Tamil Eelam in Sri Lanka. She was born in London and when she was a baby of 6 months, her family moved back to Sri Lanka. After some years they relocated to Chennai, India.

Mathangi did her schooling in Chennai, after which they returned to Sri Lanka. By the time, the civil war was in peak which forced them to go to London as refugees. The 11 years old Mathangi started learning English and exposed to hip-hop and rap through Western radio. "Those records were rhythmic, so whether you understood the language or not, you could understand the music," she says.

Mathangi got into London's Central Saint Martins College of Art and Design where she studied fine art, film and video. Her first public exhibition of paintings happened in 2001 at London, which featured the paintings of the Tamil rebellion movement. She showed some interest in film making, script writing and fashion designing also. Then she turned to music in which she is least confident with.

What makes her entering music? She says, "I haven't heard honesty in music for so long and this is how I feel, and this is what I think. Every bit of music out there that’s making it into the mainstream is really about nothing. I wanted to see if I could write songs about something important and make it sound like nothing. And it kind of worked. You don't even have to say words. I was just being as raw as possible."

Her first composing was released in 2003 (Galang). She released the next one - Sunshowers in the immediate next year. In 2005, her debutant album, Arular was released worldwide and her second album Kala was released in 2007 which made her very famous in UK and round the globe. She has also done some singles in music such as Bucky Done Gun, Nookie, Boyz, Jimmy, Sound of Kuduro and Paper Planes.

She went for a couple of world musical tours also (one of them is "People vs. Money Tour"). Arular was named one of the best album of 2005 by Blender, Spin, Rolling Stone, URB and a handful of others. USA Today chosen her as "100 Most Interesting People of 2007" and in BRIT Awards, she got selected as "2009 British Female Solo Artist". Now she was nominated for 2 Grammy awards and an Oscar award.

Her international political views and interest in liberation struggle of Tamils in Sri Lanka are very much notable. She commented "You can't separate the world into two parts like that, good and evil. Terrorism is a method. But America has successfully tied all these pockets of independent struggles, revolutions and extremists into one big notion of terrorism." As a consequence, US denied visa for her.

Her ideals has their origin from some bad memories, "That's as bad as it could get, when you see people from your village disappearing and next they're in wheelchairs because they've been 'accidentally' shot. My school and family's house were burned down. When left Sri Lanka, the buses were stopped in the middle and people were taken off and killed. It teaches you how bad human beings can be."

She faced a bad censorship from media (one of the famous example is MTV) a lot of times. She says "From Day One, this has been a mad, crazy thing: I say the things I'm not supposed to say, I look wrong, my music doesn't sound comfortable for any radio stations or genres, people are having issues with my videos when they're not rude or explicit or crazy controversial. I find it all really funny."

Mathangi in not much comfortable with the way her music composings and albums received or perceived by the world audience, "People don't realize that I had to come from a village in Sri Lanka to get here. So the journey is about the journey itself, not just about doing music. Nobody wants to be dancing to political songs". But how and in what way her songs and rap would help people to achieve the freedom?

They can't touch me
We break off
Run so fast they can't even touch me
Been that gypsy
Touch me I'll show you tricks with my zig-zag quickly
Pick up that pack on my journey
Dogs run, they start to follow me
Have my luck, some days they suck
When you live for the buck
We get for the family

"You can't grab someone by the neck and choke them and then complain they're kicking you. If you're going around oppressing people, they will fight back."

-Mathangi Maya Arulpragasam in an interview