February 10, 2009
Hello! My dear beautiful girl, before you start reading this, I have a question for you: "Do you have pink panties?" Sorry, if it's embarrassing. But you don't have any other option, particularly if you are "Loose and Forward". If you have one, continue reading this; else rush to the nearby shop to buy it.

Nisha Susan, a south Delhi girl and journalist in Tehelka's web portal started a Consortium of Pub-going, Loose and Forward Women and announced and kicked off the Pink Chaddi Campaign (also termed as "Chaddi War") on 5th February 2009 to oppose the Sri Ram Sena for the Mangalore Pub attack.

The "war" is as simple as that - yet powerful. The Pink Chaddi Campaign will send pink underwear to the office of the Mangalore pub attack perpetrators on Valentine's Day. "Be imaginative, have fun and fight back!" is the core idea behind this. Here is an except from the Campaign's blog-page:

What can you do?

Step 1: It does not matter that many of us have not thought about Valentine's 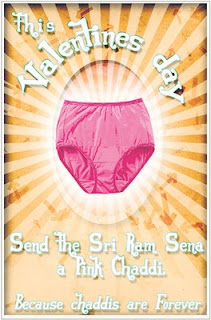 Day since we were 13. If ever. This year let us send the Sri Ram Sena some love. Let us send them some PINK CHADDIS. Look in your closet or buy them cheap. Dirt-cheap. Make sure they are PINK. Send them off to Pink Chaddi Campaign. If you don't want to mail it yourself, you can drop it off at the Chaddi Collection Points. We will be collecting across the country through this week and sending the packages on February 12.

Step 2: Send the Pink Chaddi Campaign a photograph of the package. Tell us how many chaddis you are sending out and inspire other women in other cities.

Step 3: On Valentine's Day we do a Pub Bharo action. Go to a pub wherever you are. From Kabul to Chennai to Guwahati to Singapore to LA women have signed up. It does not matter if you are actually not a pub-goer or not even much of a drinker. Let us raise a toast (it can be juice) to Indian women. Take a photo or video. We will put it together (more on how later) and send this as well to the Sri Ram Sena.

The campaign is growing exponentially - 4,500 panties has been already collected, as of today evening (according the statistics provided in their site). The Consortium will call a press conference on February 13 and the collected chaddis will then be sent to the Ram Sena chief, Pramod Mutalik.

Nisha says "The name Pink Chaddi may sound frivolous but I want to remind the supporters of moral police brigades that they are no authority to teach us religious, ethical and cultural codes. A pink chaddi is a metaphor for their disgusting act. And it's common enough for everyone to understand".

"It is a symbolic protest, we are not only protesting against fundamentalism but also pray that love blossoms in the hearts of the likes of Mutalik. I just could not believe seeing those men attack women so mercilessly. We had to respond in some way or the other because if we don't, then these guys will win. Hitting girls is not a part of Indian culture," Nisha adds.

Nithin, the campaign co-ordinator in Bangalore says, "They who called the women loose. We know who is loose and from where. If they think the Indian culture is all about treating women the way they did, then only god give them sense. The response shows how much people resent the acts perpetuated by them".

There are mixed response from girls, women and general public towards this campaign. Chaitali, One of the group members writes, "Unfortunately, we in India have a short attention span - what hurts today, heals tomorrow. But one can keep the fire burning by sparing a few moments to just listen..To watch..To reflect.."

"It is not the numbers that matter but the act itself. There is one woman who called up and told me that she has bought 100 of them dirt cheap in the market. One of my friend's mom too called up and said she will check out her wardrobe and collect as many as possible," Nisha says in excitement.

She adds, "Chaddis are personal, intimate gifts - I love or stuff them in my boyfriends coat pocket for him to find out. I am definitely not spending my money to buy them new ones." The consortium says "We should not colour-discriminate. So if you really, really can't send pink chaddis, send those in other colours."

Apart from pink chaddis, few other girls are planning to send khadi underwear, V-day cards, chaddis with love messages, dunce caps, a DVD of Mira Nair's film - Fire, pictures of semi-nude sadhus from the Kumbh Mela, the Cosmopolitan cocktail, Cupid's bow and arrow, a copy of the Kamasutra and condoms too. 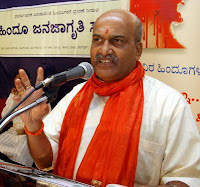 The consortium invites Both Women and Men to send in their chaddi's/ pictures of chaddi's. In the counter part, "Let them send the chaddis but I will not accept. Their move shows their obscene culture and we are fighting against this very obscenity. The move of some women to present pink chaddis reflects their mindset." says Pramod Mutalik.

But Mutalik is ready with his return gift, "It will be saris as gifts to women who plan to present me with pink chaddis". It seems the Sena has already collected 150 saris. "Instead of speaking at such baser levels on the issue of Indian culture I have raised, it will be better for them to debate the issue at the ideological level. Let there be a discussion across the table,’’ he said.

Nisha is criticising that the Mangalore attacks are just a cheap act aimed at its mass attraction and for the sake of cultural, "Before attacking the pub, the Sri Ram Sena activists invited the local media to record the entire incident. They wanted nothing but cheap publicity. And look at the publicity they received."

If, what Ram Sena did was cheap publicity, then what about the Consortium of Pub-going, Loose and Forward Women and their Pink Chaddi Campaign? OK. Leave it. Why should I need all those dirty truth as answer? Let feminism wins over the so-called moral police on this Valentine's day. That is very very important, right?

But, Where is Feminism?

It's hidden inside the Pink Chaddi.