In spite of my "close" friends' mocking at me saying that I just need a notepad application to do my blogging, recently I bought a laptop, after a long-term, deeper SWOT analysis involving variety of socio-economic factors. Its ASUS Eee PC 4G (701).

The laptop has 900 MHz Intel Celeron Mobile Processor using Intel 910GML chipset with 512 MB DDR2 RAM and 512 KB L2 Cache. The main difference between this laptop and others is this has low hard disk size (has 4Gb SSD) and lack of optical dive (no CD/DVD drive).

The size of the screen is comparatively too small - 7 inches LCD, coming with a default resolution of 800x480 (which is less compared to the standard 1280x1024). It uses four 5200mAh lithium-Ion batteries (the charger looks very much like a mobile phone charger).

The laptop has three USB 2.0 ports, an MMC/SD card reader slot, VGA port, LAN & modem ports, microphone & headphone jacks and 0.3 MP built-in video camera. Even it has a Kensington lock for safety purpose. But it is missing Bluetooth and PCMCIA Express card slot.

Other than these, the PC has touch pad, status indicators (for power, battery, SSD and wireless), built-in speakers and normal QWERTY keyboard with comparatively small sized keys (as I don't know typing I didn't care about it's typing compatibility). 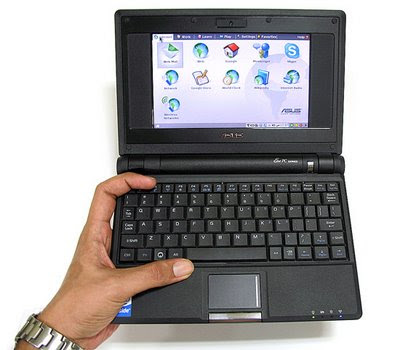 The battery life is said to be 3.5 hours but it doesn't seem to be. The bottom side is getting very hot when it is in operation (this is mentioned in the user guide itself). Also the touch pad is not sensitive enough to detect few gentle tapping.

But it is difficult to install new software in it and also not much user friendly to a regular windows user of my kind. As it is Windows XP compatible too, I go for it. After OS installation, I hardly find 1 GB free space of the total 4GB SSD (same with the previous Xandros too).

The cost of this machine is Rs.17,199 (inclusive of taxes) along with a free 120 GB external hard disk (to promote the sales by eliminating the disadvantage of low hard disk size). The expenses incurred to install a genuine/ pirated Windows XP is apart from this.

In spite of much negatives lying with this PC, what made me to choose it? None other than because of its stunning dimensions - 225x165x21~35 mm (smaller than half the size of a standard HP keyboard) and only weighs around 920 gm (one-third of the normal notebooks).

I can take the laptop to CAFE coffee day and write a blog, bursting a joke with my wife, eating chocolate ecstasy and drinking a strawberry shake. I think its in my genes that I fed up with physical dimensions, even with laptops - what to do?